Marshall's highly successful approach to executive development and coaching includes a strong emphasis on the involvement of stakeholders, implementation of change, and follow-through to measure growth in leadership effectiveness. In the end, the only thing that counts is leadership growth i.e., leadership (behavior) effectiveness on the job as perceived by stakeholders. As Marshall puts it: "Leadership Change and Coaching are simple but not easy!" Stakeholder Centered Coaching developed by Marshall Goldsmith is a highly effective, transparent, structured, and time-efficient process that works as follows: 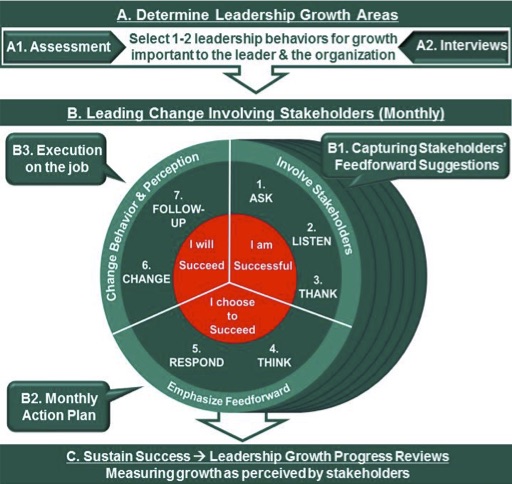 A. Determine 1-2 Leadership Growth Areas Important to the Leader and the Organization

In consultation with the coach, the leader selects 1-2 specific behaviors that are important for his/her leadership growth (e.g., empowerment and decision making). Behavioral interviews and multi-rater leadership assessments (180° – 360°) are used to determine the aforementioned focus.

The leader selects a handful of stakeholders, mostly the boss(es), direct reports, and peers. Throughout the coaching program, the leader involves these stakeholders monthly in the leadership growth process, creating accountability for the leader in implementing the change, as well as for the stakeholders to support and take part in the change process. This impacts and benefits the leader's team as a whole.

Every month the leader asks stakeholders to provide a few practical feedforward suggestions as it relates to his/her leadership growth areas.

B3. Change Behavior and Perception through Execution on the Job

What are the 20 most ineffective habits for leaders today?

Discover the skills that leaders want to improve! Based on our studies, we have compiled a list for you with the most frequently chosen leadership growth areas as chosen by today's top leaders

The 25 Most Wanted Leadership Skills
among today's Leaders?

Discover the skills that leaders want to improve! Based on our studies, we have compiled a list for you with the most frequently chosen leadership growth areas as chosen by today's top leaders

Please wait while you are redirected to the right page...